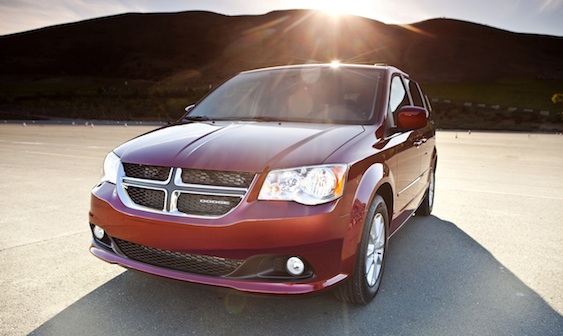 Most of you reading this are probably just as interested in this article as much as I am writing it…but it’s ok! I’m just talking about the new 2011 Dodge Grand Caravan: one of the ideal choices for people carriers since the Grand Caravan had introduced itself being the first modern minivan in the 1980s…which Jeremy Clarkson once said about minivans, is like saying: “I’ll have syphilis…the best of the sexually transmitted diseases.”

For 2011, the Grand Caravan has been visually updated while receiving some significant suspension, power and drivetrain overhauls – mmm, exciting.

Click here for more news on the Dodge Grand Caravan.

“At Dodge, we believe that just because a driver needs the versatility of a minivan doesn’t mean that the experience has to be boring,” said Ralph Gilles, President and CEO — Dodge Brand, Chrysler Group LLC. “Our engineers redesigned and retuned virtually every system in the new Grand Caravan’s suspension. That suspension overhaul, combined with a new V-6 engine that delivers best-in-class horsepower, gives Grand Caravan drivers a dynamic driving experience that other minivans in the segment just don’t deliver. We encourage you to get behind the wheel, and enjoy a driving experience once never thought possible in such a functional vehicle.”

Check out more after the jump.

Being a petrolhead, I’ll start with the engines. As previously mentioned, Dodge has released an all new Pentastar V6 that is being used throughout Dodge’s lineup as the standard engine of choice if a four-banger isn’t offered, depending the model. Gone into the pages of history are the workhorse 3.3L, 3.8L and 4.0L V6s and in comes the new 3.6L V6 mated to a new six-speed automatic. Results are best-in-class Power ratings of 283hp and 260 lb-ft of torque. But Dodge claims that fuel economy is virtually the same as the outgoing model. Sweet Jesus!

Visually, the Dodge Grand Caravan also receives a facelift, which allows for a more aggressive stance – I don’t know how aggressive a people carrier can be – kind of like adding racing stripes to refrigerator. The interior too has received some work, which Dodge claims will be void of the cheap materials that haunted Mopar cars of the past.

Dodge’s goal with the new Grand Caravan is to target men with all of these visual and dynamic upgrades. But if I was 40, had kids, a mortgage to pay and a 401k, I would rather get a Volkswagen Passat Estate. Does the reworked Grand Caravan have the substance to prove that family men don’t have to despair the sacrifice in exciting transportation for their loved ones? Check back with EGM to find out.

It’s all about sustainability: 2011 Ford Explorer is 85 percent recyclable

August 5, 2010 Omar Rana Comments Off on It’s all about sustainability: 2011 Ford Explorer is 85 percent recyclable