As announced earlier this month, Honda has revealed the production version of the New Small Concept at the 2010 Thailand International Motor Expo. Known as the Honda BRIO, the new small vehicle has been developed for Asian markets and is scheduled to go on sale in India and Thailand in 2011.

“Honda would like to expand the joy of mobility to more customers in Thailand, India and other Asian countries through the introduction of a new small vehicle with compact and highly efficient packaging by utilizing our own experiences cultivated by motorcycle business here in Asia,” said Takanobu Ito, President and CEO of Honda Motor.

Will it ever come to the United States. We highly doubt it for now.

Honda BRIO Prototype is being developed with Honda’s advanced technologies, while further advancing Honda’s “man maximum, machine minimum” concept*1. Being developed as a commuter which is easy-to-use even in urban areas, the Honda BRIO prototype adopts an easy-to-handle compact body (length 3,610mm x width 1,680mm x height 1,475 mm) while ensuring enough cabin space achieved by highly efficient packaging. With this vehicle, Honda thoroughly pursued the creation of an advanced exterior form, which is compact while asserting a strong presence.

For the mass-production model, which will be an entry-level car, for which demand is increasing in newly emerging nations, Honda will develop unique versions for Thailand and India to reflect different customer needs in those markets. Moreover, with this vehicle, Honda will leverage the resources Honda has cultivated through its motorcycle business and utilize local sourcing of parts and materials such as sheet steel.

For the Thai model that is scheduled to be introduced in March 2011, the fuel economy of more than 5liters/100km*2 will be targeted so that the vehicle will qualify as an eco-car by the Thai government, and a starting price of approximately 400,000 baht will be targeted as well. For the Indian model that is scheduled to be introduced within 2011, local customer needs for a small car will be reflected and local content will be increased to create a model that achieves a good balance between vehicle performance and price. 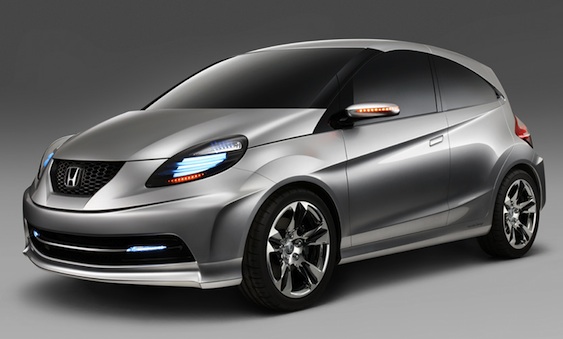