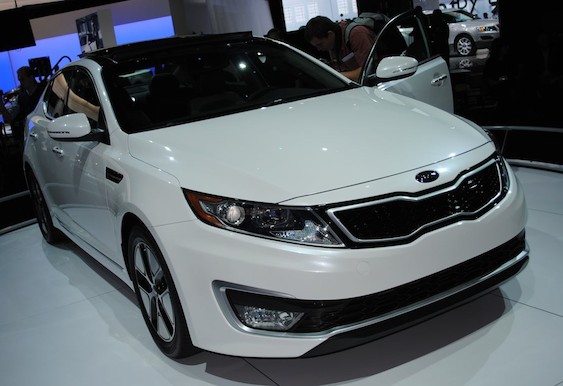 At the 2010 LA Auto Show, Kia unveiled the new 2011 Optima Hybrid, the brand’s first-ever hybrid for the U.S. market. Stunning design, outstanding quality an estimated 40 mpg class-leading fuel-economy, the 2011 Kia Optima Hybrid is sure to be a successful model for the Korean brand.

“Kia Motors is aggressively expanding its green car investments and R&D in much the same way we committed ourselves to the quality and design innovations over the last decade that have fueled our dramatic brand transformation,” said Michael Sprague, vice president, marketing & communications, KMA. “By adding our first-ever hybrid in the U.S. to the Optima lineup we are providing consumers with three powerful and fuel-efficient powertrain choices, and continuing Kia’s philosophy of offering stylish, value-packed vehicles with outstanding fuel efficiency.”

Power for the Kia Optima Hybrid comes from a full parallel hybrid system (powered by a lithium polymer battery) that allows you to drive zero-emissions, fully-electric up to 62 mph. The hybrid system is mated to a modified 2.4-liter Theta II engine to operate on an Atkinson cycle, raising the compression ratio by 20 percent to maximize its fuel-efficiency and achieving a 10-percent fuel saving over a regular Theta.

The 2011 Kia Optima Hybrid will go on sale in early 2011. Prices will be announced closer to launch date.

Would you consider buying the Kia Optima Hybrid over the Ford Fusion Hybrid or Toyota Camry Hybrid? Let us know in the comments section below – or just cast your vote in the poll below.

IRVINE, Calif., November 17, 2010 – As the latest model in Kia’s design-led transformation, the all-new 2011 Optima midsize sedan lineup expanded today with Kia Motors America’s (KMA) introduction of the all-new Optima Hybrid at the Los Angeles Auto Show. With a stunning design, roomy interior, and an estimated 40 mpg class-leading fuel efficiency, Kia’s first-ever hybrid in the U.S. will attract those looking for a striking and well-equipped sedan that does not sacrifice style, comfort, performance or value for fuel efficiency. Set to hit showrooms early next year, the Optima Hybrid employs a Kia-developed powertrain that includes several innovations that enable it to provide exceptional hybrid performance and efficiency.

The 2011 Optima Hybrid uses a full parallel hybrid system and can be driven in zero emission, full-electric drive mode at speeds up to 62 miles per hour or in blended gas-electric mode at any speed. When the car comes to a stop and the electrical load is low, the engine shuts off to completely eliminate idle fuel consumption and emissions.

The 2011 Optima Hybrid’s outstanding efficiency is due in large part to the use of a lithium polymer battery, which was developed in South Korea with partner LG Chem. The power and energy density of this new battery type allowed Kia engineers to create a lighter and more compact battery pack, with the 30 kilowatt battery pack weighing just 95.9 pounds ““ 28 pounds less than the 2011 Toyota Camry Hybrid’s nickel metal hydride pack ““ which aids fuel economy and also helps to maximize Optima’s cargo space.

The Optima Hybrid’s battery will hold its charge up to 25 percent longer than hybrids with nickel metal hydride batteries, so the battery is more likely to have usable energy available even if it has not been in use. Both fuel consumption and emissions are cut, allowing more electric starts and drive-aways. With that improved efficiency, more of the recovered kinetic energy and charging energy from the engine is available to move the car as necessary, which allows the vehicle to provide electric driving assist more often and for a longer period. Lithium polymer also has less of the self-discharge characteristic found in most rechargeable batteries.

Unlike most current systems on the market, the Optima Hybrid powertrain is configured with a unique architecture. Compared to the power-split hybrid systems found on vehicles from Toyota or Ford, the Optima Hybrid uses a Transmission-Mounted-Electric-Drive (TMED) layout with the electric motor separated from the transmission gear-set. Offering several advantages, this modular layout includes more efficient powertrain packaging, use of many “off-the-shelf” components such as the existing six-speed automatic transmission found on the 2.4-liter GDI Optima, and reduced engineering investment. This also allows for other possible future combinations including the application of more powerful motors and higher capacity batteries.

The Optima Hybrid also is among the first full hybrid systems on the market to use a typical step-ratio automatic transmission. The extremely compact six-speed automatic that debuted on the 2011 Kia Sorento CUV is carried over to the hybrid largely unchanged. An external electrically-driven oil pump also has been added to provide the hydraulic fluid pressure needed to keep the clutches engaged when the vehicle is in idle stop mode.

The Optima Hybrid’s electric motor is hard-coupled to the input of the transmission and equipped with a permanent magnet synchronous electric traction motor that produces 40.2 horsepower (30 kilowatt) and 151.2 pound-feet of torque when electric only, and an impressive 206.2 horsepower and 195.4 pound-feet of torque when in hybrid mode. This replaces the torque converter, with a multi-disc clutch is fitted between the engine and motor, enabling the gasoling engine to be de-coupled from the powertrain for idle stop and electric drive modes. Employing this layout allows the entire package, including a torsional damper, to fit virtually within the same area as the traditional torque converter.

Another unique component of the Optima Hybrid is the Hybrid-Starter-Generator (HSG). This 8.5 kilowatt starter motor-generator is belt-driven off the Theta II engine and operates at the same 270 volts as the electric traction motor and the lithium polymer battery, but does not provide any tractive effort to the vehicle. In its place, the HSG is used only to start the engine and then to charge the hybrid battery.

One of the main benefits of the hybrid electric powertrain provides is the capability to recover energy lost during braking and store it for use during acceleration and cruising, so when the brake pedal is applied, the engine is decoupled from the traction motor and gives no drag on the vehicle. The motor is then used as a generator to recharge the hybrid battery. Converting the kinetic energy into electrical energy rather than thermal energy through the friction brakes also reduces the wear on the brake linings so they last longer. When conditions require emergency stopping or driving on hills, the extra reliance on regenerative braking allows for the brakes to be more effective.

The Optima Hybrid uses an electronically controlled brake system to determine the driver’s braking needs based on the degree of pedal application, which is then converted to a total brake torque requirement. The hybrid system control then detects the current level of battery charge, vehicle speed and other conditions to determine how much regenerative braking is possible under current circumstances. The brake control system then receives the maximum regenerative braking level to manage the friction braking torque so that total net torque is equal to the driver’s needs.

Like all other 2011 Optimas, the hybrid uses an Electric Power Assist Steering (EPAS) system that instantly provides boost and only when it is needed during steering maneuvers. Reducing the extra weight compared to an engine-driven hydraulic assist, the EPAS is independent of the engine and also provides assistance when the engine is not running, such as during idle stop or electric drive mode.

Taking advantage of the instant and continuously available torque from the electric motor, Kia engineers modified its popular 2.4-liter Theta II engine to operate on an Atkinson cycle, raising the compression ratio by 20 percent to maximize its efficiency and achieving a 10-percent fuel saving over a regular Theta engine. This cycle generates a little less torque, but the electric motor compensates for any loss and consequently, the Optima Hybrid’s overall power and torque outputs are greater than the regular model.

With the Optima also weighing in as one of the lightest cars in the segment, high performance and outstanding fuel efficiency are a natural result. The lightweight architecture of the new Optima platform, combined with the lightweight lithium polymer battery pack, brings the Optima Hybrid in at just 3,490 pounds, 230 pounds lighter than the 2011 Ford Fusion Hybrid.

The end result of the Optima Hybrid’s highly-efficient powertrain, low-rolling resistance tires, and clean aerodynamic signature is truly exceptional highway fuel efficiency, the best of any mid-size hybrid sedan in the market.