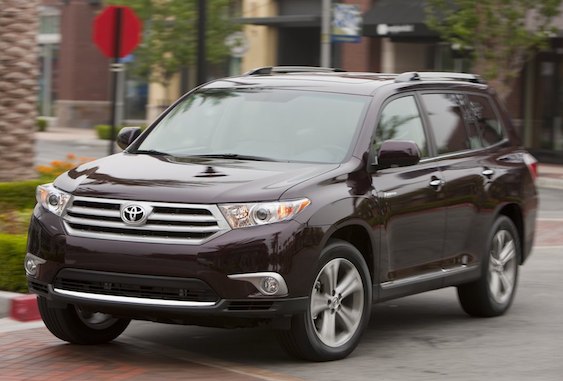 Following its world debut at the 2010 Moscow Motor Show in August, the 2011 Toyota Highlander is making its North American debut today.

The 2011 Toyota Highlander is available in Base, SE and Limited grades in both two-wheel and full-time four-wheel-drive. The Highlander Base and SE model come standard with a 2.7L 4-cylinder engine that joined the lineup in 2009, offering an EPA estimated fuel-economy of 25 mpg in highway driving. The engine produces 187-hp and 186 lb-ft of torque. The Highlander Limited model comes standard with a 3.5L V6 engine making 270-h and 248 lb-ft of torque. The engine is available on other models as well.

The 2011 Toyota Highlander Hybrid continues on with the company’s Hybrid Synergy Drive system but features a more powerful 3.5L V6, which replaces the outgoing 3.3L V6. The 2011 Highlander Hybrid makes a total of 280-hp and receives an EPA estimated fuel-economy rating of 28/28 mpg (city/highway).

For 2011, standard equipment levels have been improved across all Highlander trim levels. All models now include a standard 50/50-split third-row with rear climate control, improving both cargo flexibility and passenger comfort.  An optional Tech Audio package includes a USB port, integrated satellite radio, and Bluetooth connectivity for phones and streaming audio.

The 2.7-liter four-cylinder engine, which was available only in the Highlander Base grade model for 2010, is now also offered in the SE, the most popular grade (2WD only). The Highlander Hybrid debuts a more powerful and advanced 3.5-liter V6 gasoline engine, along with a standard Tech Audio Package and unique exterior design elements.

The first-generation Highlander pioneered the midsize crossover utility vehicle segment, ushering in car-like performance, comfort and fuel efficiency yet with SUV-like roominess and versatility. The second-generation Highlander amplifies those attributes and is among the leaders in the segment in standard active and passive safety features.

New Styling Details for 2011
The Highlander gets a sophisticated design update for 2011 featuring a new front fascia, hood and fenders, with the profile freshened by black rockers with chrome accents (gas models only). The headlights and tail lamps are also redesigned, as are the 17-inch alloy wheels. The Limited Grade offers stylish 19-inch wheels and also features silver roof rails. The SE grade gains a power liftgate.

The 2011 Highlander Hybrid is more easily distinguished from the gasoline model by its own unique grille and bumper design. It shares the new fenders and hood with the gas Highlander but features color-keyed rockers with chrome accents, plus vertically stacked fog lamps. The projector beam headlights and redesigned taillights feature blue lens covers. Daytime running lamps are now standard on all Highlander models.

Expanded Amenities and Tech for 2011
The Highlander remains a popular family vehicle and caters to that market more effectively for 2011 with more standard amenities and user technologies. In particular, Base and SE grades feature more comfort and convenience features than previously offered. A standard 50/50 split third-row seat and manual rear climate control have been made standard for all 2011 models.

The new Tech Audio is standard for SE and Limited and optional for Base grade and features a USB port, integrated XM Satellite Radio (includes 90-day trial subscription) and Bluetooth®, helping ensure a wide array of “connected” capabilities for passengers. In the Base grade, this is part of a more comprehensive package that also includes a backup monitor with 3.5-inch multi-information display, an eight-way power drivers seat, tonneau cover, engine immobilizer, easy-clean fabric interior, flip-up liftgate window, fog lamps and black roof rails.

The Highlander Hybrid base grade offers a new Leather Package that includes leather-trimmed front seats with front seat heaters, leather-trimmed steering wheel and shift knob, power moonroof, HomeLink®, auto-dimming rearview mirror with compass, plus an engine immobilizer with security alarm. The optional navigation system is now available for the SE grade (previously only on Limited), while the Limited gains standard automatic climate control for the rear and offers a new perforated leather. The Highlander Hybrid Base grade gains standard easy-clean fabric seating, along with an eight-way power driver”s seat, the Tech Audio, the third-row seat and manual rear climate control.

The engine is equipped with a variable intake manifold and dual variable valve timing with intelligence (VVT-i), which controls phasing on both the intake and exhaust camshafts to optimize torque and fuel efficiency. The four-cylinder engine is teamed exclusively with a standard six-speed electronically controlled automatic transmission.

The 4WD Highlander Hybrid uniquely generates rear-wheel power with a separate electric motor (MGR) that provides additional drive torque on demand. Thus, the Highlander Hybrid 4WD-i system does not require power-transfer gearing or a driveshaft from the front. The system electronically varies front and rear torque distribution depending on traction conditions.

Activating an EV mode switch located on the front center console allows the driver to operate strictly in electric-mode under certain conditions for a limited distance at low speeds, or in some stop-and-go driving conditions. A new ECON drive mode switch activates a throttle control program that reduces the throttle response during acceleration, enhancing fuel economy. The Hybrid System Indicator in the instrument gauge panel provides the driver with a guideline to help maximize fuel consumption.

Handling and Ride
The Highlander continues to build on its strength of delivering one of the most capable, smooth and quiet rides in the segment. Four-wheel independent suspension is via MacPherson struts in front and a dual-link strut rear suspension system. Base and SE Highlander models are equipped with standard 17-inch alloy wheels with 245/65 R17 tires; the Limited features standard 19-inch alloy wheels with 245/55 R19 tires. A direct tire pressure monitoring system is designed to alert the driver if pressure in a tire drops to critical levels. All Highlander models are equipped with four-wheel disc brakes. On conventional Highlander 4WD models, full-time four-wheel drive is available on all V6 grades.

All Highlander models incorporate a corner-braking feature. Harnessing the integration of the vehicle”s dynamic control systems, this feature limits brake pressure on inside wheels during cornering to help enhance control through the turn. Standard on all models, Hill-Start Assist Control helps prevent the vehicle from rolling backward from a stop by applying braking pressure for approximately two seconds.

Downhill Assist Control (DAC) is standard equipment on all gas 4WD models. The DAC feature is designed to maintain a constant speed and maintain handling and steering control by reducing wheel lock under braking even at slow speeds on slippery descents.

Occupant Safety
Highlander comes standard with seven airbags. These include advanced driver and front passenger airbags, front seat-mounted side airbags and a driver’s knee airbag. Roll-sensing side curtain airbags help to protect the occupants of all three rows in the event of certain side collisions or vehicle rollovers. Additionally, all Highlander models are standard equipped with front active headrests.

The Highlander SE and Limited grades feature a standard backup camera with a 3.5-inch multi-information display; this feature is available for Base grade models for 2011 as part of the optional Tech Package. The display includes a backup camera monitor, clock, outside temperature, warning messages, and cruise information that includes average fuel economy, average speed, distance to empty, current fuel economy, and trip timer. On models equipped with the optional navigation system, the backup camera’s images are viewed on the seven-inch navigation screen.

Options
A variety of available options and accessories include a voice-activated touch screen navigation system with an eight-inch screen; JBL premium audio; leather seat trim with heated front seats, and a power tilt/slide moonroof. The optional tow package for V6 models enables up to 5,000-pound maximum towing capacity. The four-cylinder tow package enables up to 3,500 pounds of maximum towing capacity. A power liftgate that can be opened and closed with a key fob is an available option on the Base grade and standard on SE and Limited.

Interior Design
The Highlander provides an open, airy and versatile interior with seating for seven or up to 95.4 cubic feet of total cargo capacity (94.1 for Highlander Hybrid). There are numerous storage compartments throughout the cabin, along with 10 cup holders, four bottle holders, two front and one cargo-area 12-volt auxiliary power outlets and cargo area tie down hooks.

The Base and SE grades feature a center console, shift knob with silver-painted accents and front driver and passenger assist grips. The center console, shift knob and assist grip on the Limited grade feature wood grain-style trim. Styling features on the inside of the Highlander Hybrid include a silver and wood grain-style interior trim with chrome door handle accents, Optitron meters with blue graphics and a power meter with a hybrid system indicator.

The headrests are adjustable in two ways on the Base grade and four different ways on SE and Limited. The second row provides 40/20/40 split seatbacks. The seat functions as either a three-person bench or, by removing the Center Stow™ seat, a pair of captain’s chairs complete with armrests, creating a convenient walk-through area between the seats for easier access to the third row. A Center Stow™ center console can also be placed between the seats to provide additional storage. The second row also slides fore and aft and reclines.

Access to the third-row is made easy by placing the walk-in lever at an easy to reach position at the bottom of the passenger-side second-row seat. Standard one-touch levers inside the cargo area allow the second-row seats to fold forward and flat. The third-row seats function in a similar manner, using a lever in the back of the seat.

Production of the conventional engine Highlander, Toyota”s 12th North American-built model, began in October 2009 at the company”s plant in Princeton, Indiana. Moving the Highlander assembly line to this facility represented a $450 million investment.

Limited Warranty
Toyota”s 36-month/36,000 mile basic new-vehicle warranty applies to all components other than normal wear and maintenance items. Additional 60-month warranties cover the powertrain for 60,000 miles and corrosion with no mileage limitation. Toyota dealers have complete details on the limited warranty. 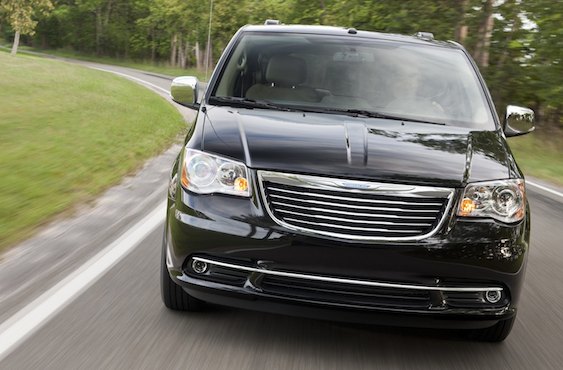 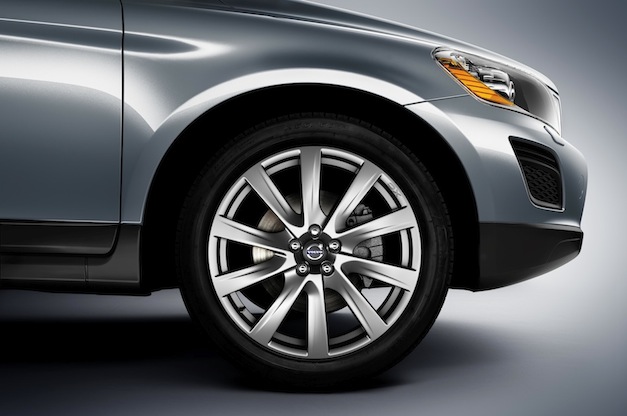