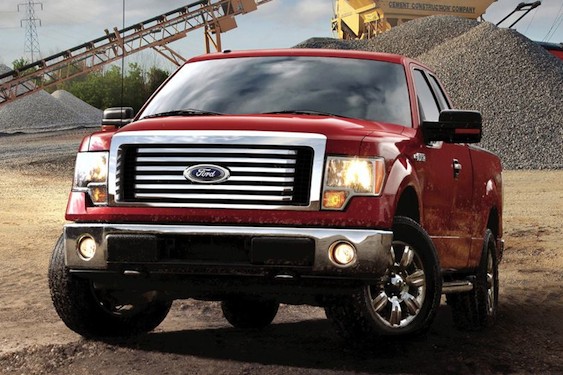 The 2011 Ford F-150 will be officially available for purchase at the end of 2010 and today, FoMoCo is releasing all the details on the 2011 model year of America’s best-selling truck for 33 years running.

“For the past 33 years, the Ford F-150 has stood alone as the truck people really rely on,” said Mark Fields, Ford president of The Americas. “The class-leading capability of the F-150, combined with the durability that defines “˜Built Ford Tough,” has made it the No. 1 choice of full-size pickup buyers. Now for 2011, that class-leading towing and payload capability is enhanced even further with engines that deliver projected class-leading fuel economy, allowing our customers to be more productive by maximizing their workload and their fuel economy.”

Hit the jump for the high-res image gallery and the press release for more details.

Including the 3.5-liter EcoBoost, which will be available in early 2011, a total of four new powertrains are available in the 2011 F-150. Each new engine is mated to a six-speed automatic transmission. Ford is the first and only manufacturer to equip its entire full-size pickup truck lineup with fuel-saving six-speed automatic transmissions as standard

Another fuel saver is the addition of class-exclusive electric power-assisted steering (EPAS) to the 3.7-liter V6, 5.0-liter V8 and 3.5-liter EcoBoost powertrains. The EPAS system replaces a conventional hydraulic system, which runs continuously off the engine, with a system that draws power only when needed. Additionally, EPAS enables several other driver convenience technologies and provides better steering feel. Ford is the first manufacturer to widely offer EPAS on full-size pickup trucks.

“The 2011 Ford F-150 lineup offers our customers the widest array of powertrain solutions,” said Bob Fascetti, director of large gas and diesel engine engineering. “From the entry-level to the high-end customer, each 2011 F-150 will deliver projected best-in-class capability, power and fuel economy along with features and conveniences our competition can”t match.”

A look at the new engine lineup
The three new truck engines available at launch are the 3.7-liter V6 and 5.0-liter V8, each with fuel-saving and performance-enhancing twin independent variable camshaft timing (Ti-VCT) technology, and a version of the 6.2-liter V8 that is the base engine in the 2011 Ford F-Series Super Duty. Here are the highlights of each new engine:

SelectShift functionality is available in the six-speed automatic transmission. SelectShift allows customers to select the desired gear. The transmission also features progressive range select, which allows the customer to lock out the available gears while in Drive.

Also enabled is tow/haul mode, which provides better control when hauling a heavy load or towing a trailer, especially when descending grades. The improved system uses an array of sophisticated electronic sensors to better predict the driver”s need for a downshift to provide engine braking and enhanced control.

Along with improved fuel economy, another key benefit of EPAS is that the steering gear can be more precisely tuned for optimum feel for on-road and parking efforts. The tuning is software-based, so the steering can be programmed and essentially customized to each model based on wheelbase, powertrain and other factors.

“The addition of EPAS is a huge step forward for the F-150,” said Eric Kuehn, chief engineer of the 2011 Ford F-150. “It allows for lighter parking lot efforts but will retain that on-road feel and steering precision truck customers expect.”

The wide range of powertrain options is complemented by the greater variety of offerings in the 2011 F-150 as well as the expanded content. A 4.2-inch LCD message center and larger  in-mirror rear view camera screen are among the new customer conveniences available.

New clusters include the available 4.2-inch LCD message center screen”s menu options display, which includes information related to fuel economy, towing performance and off-roading. The menu is navigated through a five-way button on the steering wheel. The screen in the rearview mirror for the rear view camera option not only is larger (increased from 2.5 inches to 3.5 inches), it has higher resolution than the outgoing version. Further, customers can zoom in or out, which is particularly helpful during towing hookup and other towing operations.

Other new standard and available content includes a three-point safety belt and head restraint for the middle passenger in the front seat, express up and down front windows, 110-volt outlet, Remote Start, telescoping steering wheel, HD Radio™ and perimeter alarm.

Ford Work Solutions features an in-dash computer that provides full high-speed Internet and wireless accessories that include a mouse and printer; Tool Link™, a Radio-Frequency Identification (RFID) asset tracking system that enables customers to maintain a real-time inventory of tools or equipment stored in the vehicle; Crew Chief™, a fleet telematics and diagnostics system; and Cable Lock System to secure large tools or equipment in the cargo area.

Safety enhancements
New for the 2011 Ford F-150 are a seat-integrated shoulder belt for the front middle seat, a head restraint for the second-row middle seat and integrated spotter mirrors. These additions join numerous standard safety features, including an advanced safety cage with high-strength steel and six standard airbags.

The 2011 F-150 FX2 and FX4 are now more unified, with FX2 customers able to share the sporty yet rugged off-road look originally pioneered by the FX4. The FX2 and FX4 share common grilles, 18-inch wheels (20-inch wheels optional), body-color power mirrors, body and tailgate handles, black surround headlamps and taillamps. The trucks are differentiated by unique badging on the box and front fenders.

Both the XLT and Lariat have added off-road packages, including electronic locking rear differential, skid plates and off-road-tuned front and rear shock absorbers.

The 22-inch polished forged aluminum wheels with body-color accents are complemented by a specially tuned suspension for more precise handling.

“The 2011 Ford F-150 has all the best-in-class towing and payload capability and durability our tough truck customers demand and now takes a giant leap forward in fuel economy, performance and technology,” said Kuehn.