Ford is all about its “kinetic” design language; however, in the past the brand has felt somewhat restricted in pushing its creativity to the limits. According to J Mays, Ford”s group vice president for design and its chief creative officer, the sale of former PAG (Premier Automotive Group) brands including Jaguar, Land Rover, Aston Martin and Volvo has allowed designers to be a little more… well “creative.”

Mays said that it was difficult to oversee the designs of several different marquees.

“It was like painting the Golden Gate Bridge. I would get to one end and the other end would already start rusting, so I”d run back and start going again,” he said. “I was an inch deep and a mile wide. I would go from one review to the next, and then start the whole thing over again.”

Mays says that since Ford dropped PAG and pursuing its global vehicle strategy, designers have been able to explore their desires in kinetic design.

“There”s a huge array of creativity afforded to our design team,” he said. “Kinetic design applies to both exteriors and interiors, but there”s a framework that keeps them inside of the brand parameters.”

The most recent example of this was seen in the Ford Start Concept. 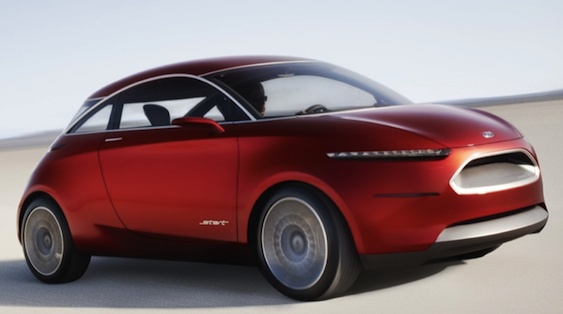 Report: Ford Start to enter production in 2014, will replace Ka

October 15, 2010 Omar Rana Comments Off on Report: Ford Start to enter production in 2014, will replace Ka

Ford 3-cylinder EcoBoost still a “ways off” for the U.S.