Audi confirmed today that it will be showing a concept version of A8 Hybrid and the A1 e-tron at the 2010 Geneva Motor Show this week. Audi also confirmed that the “e-tron” name will play important part in distinguishing the brand’s electric-mobility lineup.

“In future our customers will be able to choose from an increasingly broad range of driveline technologies,” said Rupert Stadler, Chairman of the Board of Management of Audi. “To accompany our high-efficiency TDI and FSI engines, we shall offer electric power in the best possible forms for a wide range of mobility needs. The hybrid driveline will be followed by all-electric vehicles. The ‘e-tron’ name will have an important part to play. Just as ‘quattro’ has become a synonym for all-wheel drive, so ‘e-tron’ is to be the Audi brand name for electric mobility.”

The Audi A1 e-tron will be shown as a design study (a fancier way of saying concept) at the Geneva Motor Show this week. It is powered by a 102-hp electric-motor that has a range of more than 31 miles. After battery supply is depleted, it is recharged by a compact “range extender” engine consisting of a single-rotor Wankel engine and an electrical generator with a charge rating of up to 15 kW. That allows the A1 e-tron to travel an additional range of 124 miles. Audi says the A1 e-tron is capable of averaging 124 mpg. The German automaker did not confirm the A1 e-tron for production.

Audi also confirmed today that the A8 Hybrid, which will be shown in concept form at Geneva, will be available to order by late 2011. Power for the A8 Hybrid comes from a 2.0 TFSI 4-cylinder engine and an electric-motor with a combined output of 245-hp and a peak torque of 354 lb-ft. That will allow the A8 Hybrid to average a combined fuel-economy of 38 mpg. Audi says that the A8 Hybrid is also capable of running on electric-mode at speeds of up to 40 mph for more than 1.2 miles.

At the end of 2010, the 2011 Audi Q5 Hybrid will hit dealerships. Audi also said that at the end of 2012, it will produce the e-tron electric-vehicle seen at the 2009 Frankfurt Motor Show. It said that small series will be built as the brand’s first electric-car.

Read the press release below for more details.

AUDI AG: driveline strategy for the future ““ electric mobility as an integrated concept

* Q5 hybrid to be unveiled in 2010, A8 hybrid can be ordered from late 2011
* World premiere for A1 e-tron study at Geneva Motor Show
* “e-tron” to be Audi”s brand name for electric mobility

Audi is working intensively to answer questions of future mobility. In late 2010/early 2011 the Q5 hybrid will reach the market, the first Audi with a combination of gasoline engine and electric motor. In Geneva Audi is exhibiting the A8 hybrid for the first time as a concept car: Its CO2 emissions of 144 g/km (231.75 g/mile) are the best figure in the full-size category. Another world premiere in Geneva is the A1 e-tron design study, which shows that Audi”s expertise in electric drive systems extends down into the compact car segment. At the end of 2012 Audi will launch the e-tron electric car that was seen last year at the Frankfurt Motor Show (IAA). A small series will be built, and will be the first electric car to reach the market.

When developing alternative drivelines, Audi is pursuing a strategy of introducing each technology where it is appropriate for specific model lines and markets, in other words where it will offer customers significant benefits.

“We regard the full hybrid as we know it today primarily as a very specific technology for reducing fuel consumption. In due course plug-in hybrids will demonstrate their strong points when drivers expect to cover longer distances in the pure electric mode, in combination with a conventional engine,” says Michael Dick, Member of the Board of Management for Technical Development at AUDI AG.

According to Dick: “The strength of the electric car clearly lies in the urban mobility area, where the demand for emission-free local transportation will strongly increase.” In addition to hybrids and electric cars, Audi continues to develop its long-term competence in the development of basic propulsion concepts using fuel cells and hydrogen as an energy carrier.

Every year Audi invests around two billion euros in development projects, with the focus on continued progress in internal combustion engine design and associated areas. Electric mobility is a further priority: In this area the e-tron show car seen at the IAA was a dramatic signal. At the same time, the various activities are being grouped together strategically. Audi has established the e-performance project house to deal with electric mobility topics. Since the autumn of 2009 a team has been at work on the research project of the same name, with support from the Federal German Ministry for Education and Research. Members of the team, consisting of AUDI AG development staff and scientists from various universities, are working on the development of a new overall electric vehicle concept, including the body, battery and power electronics.

Audi A1 e-tron
Audi will be expanding its “e-tron” model family step by step: the A1 e-tron design study that the company is exhibiting at the Geneva Motor Show is an innovative Mega City Vehicle (MCV). Like the sports cars in the same family, it is electrically propelled and has a range of more than 50 kilometers (31 miles) in city traffic. With a peak power output of 75 kW (102 hp), the A1 e-tron is also fun to drive.

When the battery”s energy supply is exhausted, it is recharged by an exceptionally compact “range extender” consisting of a single-rotor Wankel engine and an electrical generator with a charge rating of up to 15 kW.

Audi A8 hybrid
Audi is displaying the A8 hybrid as an engineering study at the Geneva Motor Show. Its two power units ““ the 2.0 TFSI engine and the electric motor ““ have a combined output of 180 kW (245 hp) and a torque of 480 Nm (354.03 lb-ft). They give the car the same outstanding performance as a large-capacity conventional six-cylinder engine. This systematic downsizing demonstrates its fuel-consumption advantages in combination with the electric driveline: the average fuel consumption is only 6.2 l/100 km (37.94 US mpg), equivalent to CO2 emissions of 144 g/km (231.75 g/mile).

The Audi A8 hybrid uses the parallel hybrid configuration ““ a highly efficient principle that avoids unnecessary friction and power losses. The powerful electric motor integrated between the 155 kW (211 hp) four-cylinder petrol engine and the eight-speed tiptronic transmission can supply a further 33 kW (45 hp) to the driveline, as well as a vigorous 211 Nm (155.63 lb-ft) of torque. The A8 design study is a full hybrid, that is to say the gasoline engine or the electric motor can propel it either separately or together. In the pure electric drive mode the car can reach 65 km/h (40.39 mph) and cover a distance of more than two kilometers (1.2 miles). 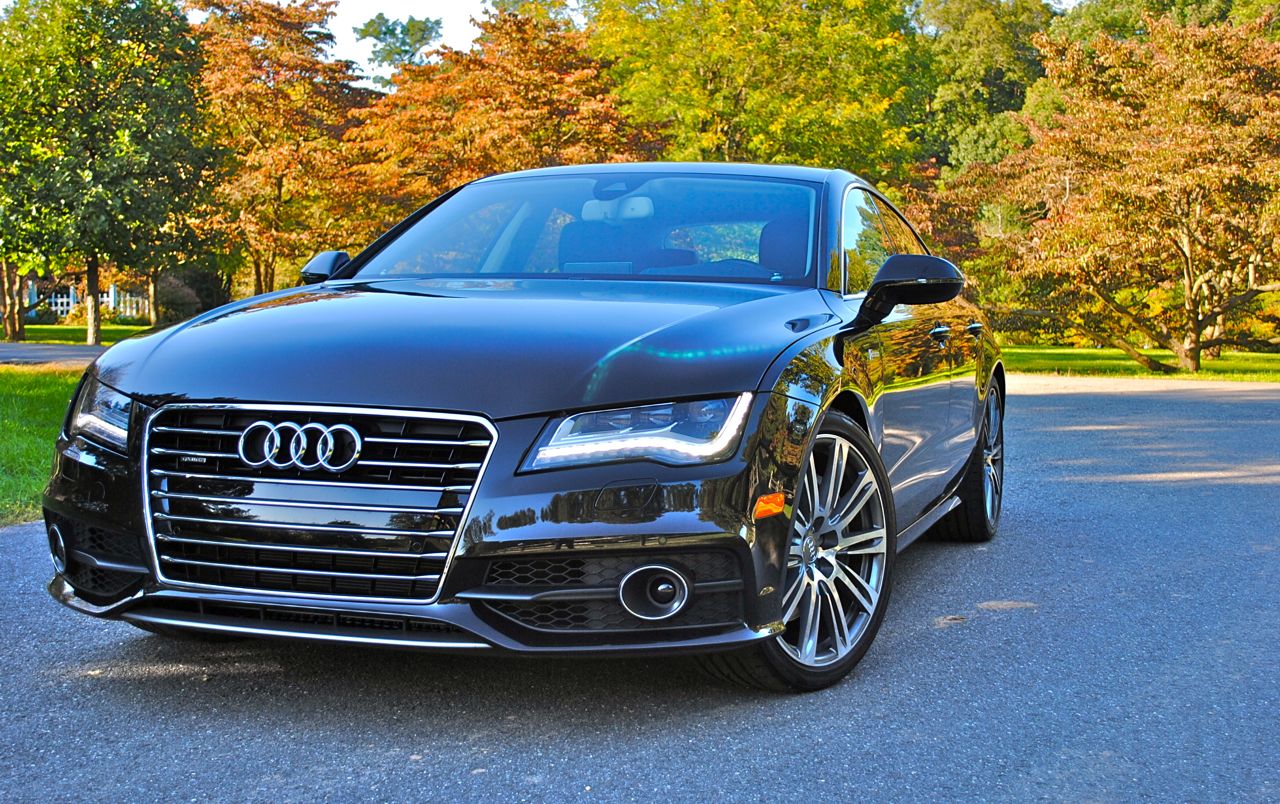 Report: Audi working on fuel-cell technology by expanding fleet with an A7-based model

June 3, 2013 Chris Chin Comments Off on Report: Audi working on fuel-cell technology by expanding fleet with an A7-based model