Tesla Motors announced today that it will launch its worldwide partnership with TAG Heuer at the 2010 Geneva Motor Show this week. Both companies teamed up to produce a one-of-a-kind collector’s Tesla Roadster with a unique interior designed by Tesla’s Chief Designer Franz von Holzhausen.

The design contains TAG Heuer avant-garde design elements and a specially designed center console due to host TAG Heuer’s cutting edge concept watch. The watch will be revealed on March 18 in Basel.

The car also features a TAG Heuer Meridiist mobile phone as well as a one-fifth second Heuer Limited Edition Stopwatch so you can time things like your 0-60 mph run. Pretty cool stuff.

This car also features a TAG Heuer Meridiist mobile phone as well as a one-fifth second Heuer Limited Edition Stopwatch. This Swiss-made timepiece with mechanical movement pays tribute to the 1860 founding of the company and evoques the mythic revival of the brand’s vintage stopwatches.

The car’s exterior color scheme is Foucault Field Gray, embodying the innovative spirit of both companies. The design was inspired by the new TAG Heuer concept watch, a technical milestone in mechanical movements, which brings technologically advanced art to life through motion.

The 2010 TAG Heuer Tesla Roadster will remain at the Tesla booth during the public show days, March 4-14 at the Palexpo-Geneva conference center. The car will then be driven to Baselworld, the world’s largest watch exhibition, for a special event March 18.

Since its founding in an artisan’s workshop in the Swiss Jura, TAG Heuer has become one of the world’s best-known luxury brands — maker of avant-garde watches, eyewear and premium mobile phones for refined consumers around the globe.

TAG Heuer, a star brand from the luxury group and worldwide leader Louis Vuitton Moet Hennessy (LVMH), also has deep roots in the automotive sector. Company founder Edouard Heuer received in 1911 the patent for The Time of Trip, the first car dashboard chronograph, followed in 1933 by the Autavia — the first dashboard timekeeper for both automobiles and aviation. The benchmark in cutting-edge chronographs and timekeeping technology since 1860, TAG Heuer is the watch brand that can claim the longest and strongest association with motor sports and dream cars. Both watches and chronographs are inspired and driven by motor sports, from Formula One to GT cars.

“TAG Heuer has a rich history and expertise with the world’s most prestigious racing teams — but this is the first ever partnership we’ve forged with an electric sports car company,” said Jean-Christophe Babin, President and CEO of TAG Heuer. “We believe that high-performance drivers are increasingly searching for products that are efficient, socially responsible and stylish. TAG Heuer and Tesla are two of the few companies arleady achieving these ideals today.”

Tesla Motors began developing an electric sports car in 2004 and remains the only automaker selling highway-capable electric cars. The Tesla Roadster accelerates faster than nearly any other supercar yet is twice as energy efficient as a Toyota Prius — the only car that delivers supercar performance guilt-free, with zero tailpipe emissions and a carbon footprint dramatically lower than any comparable sports car.

“Engineers at both TAG Heuer and Tesla understand intuitively that technology — whether worn on your wrist or driven on the road — can help us live better while we tread more lightly on this planet,” said Tesla CEO Elon Musk.

The CEOs of TAG Heuer and Tesla, along with celebrity customers of both companies, will launch their next collaboration in style on March 18 at a party during Baselworld 2010. This nine-month project, commemorating TAG Heuer’s 150th anniversary, will have worldwide reach and will raise awareness of technological innovation to consumers on three continents. 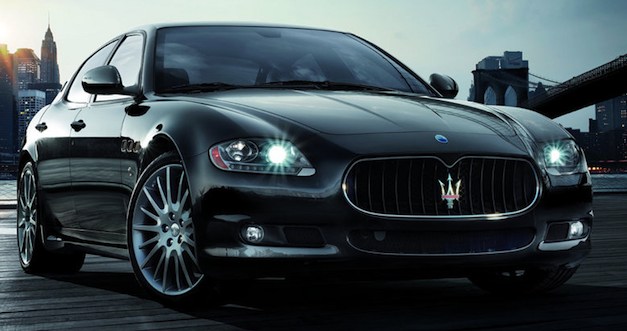 August 8, 2012 Omar Rana Comments Off on Report: Maserati’s 5 Series rival will be built on Chrysler 300 platform