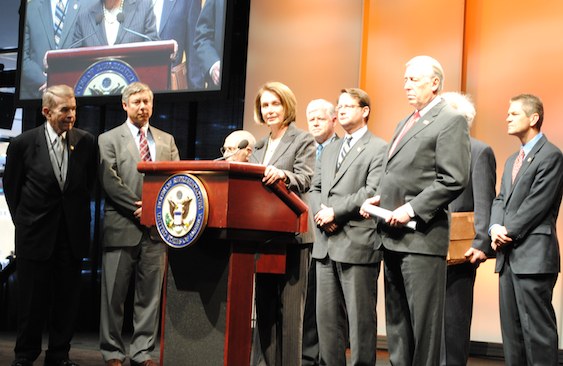 As the first day of the Press Preview for the 2010 North American International Auto Show comes to a close, American automakers were left with a big responsibility as House Speaker Nancy Pelosi ended her visit to Motown with the following quote; ‘Our hopes are riding on the auto industry.”.

In a press conference that lasted approximately 20 minutes, Speaker Pelosi, House Majority Leader Rep. Steny Hoyer, and Republican Representative Fred Upton gave praise to the industry that seemed as if it was on the verge of collapse not too long ago. Both Hoyer and Pelosi commended and re-commended the Michigan congressional delegation for their ferverous and incessant advocacy of the region, and specifically with regards to the auto industry.

Pelosi lent particular mention to the fact that had it not been for the lobbying of the Michigan delegation, the wildly successful ‘cash for clunkers’ program would have been voted on as part of a larger climate bill and not have come to bear fruit as soon as it did, if at all.

It was not about the survival of companies, said Pelosi in reference to the bailouts, but of an industry. Hoyer, reminiscing back to his childhood, a time when the American automobile was the “envy of the world.”, agreed with Pelosi’s sentiment that a successful automobile industry is directly supportive of our national security. Specifically, a technologically advanced and environmentally friendly industry will drastically reduce our dependence on foreign oil.

Pelosi promised to bring back to Washington a good report on the industry, citing that she was “impressed” with and “hopeful” about what she had seen in the Motor City. She had also eagerly mentioned her intention to return to the show next year.