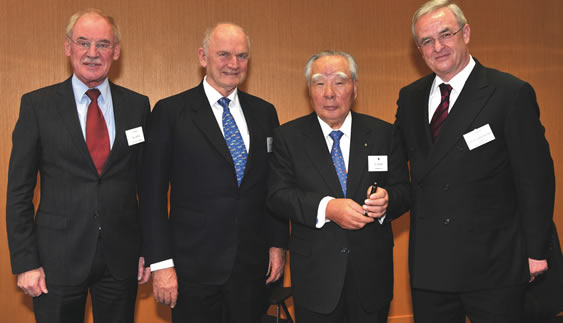 As reported yesterday, Volkswagen and Suzuki confirmed today that they have reached a “common understanding to establish a close long-term strategic partnership.” The move will be supported by Volkswagen taking a 19.9 percent stake in Suzuki, which is subject to approval and is expected to be completed by January 2010.

With their new partnership, both companies are going to take a joint approach to the growing worldwide demand for more environmentally friendly vehicles.

“Both parties are focused on achieving synergies in the areas of rapidly growing emerging markets as well as in the development and manufacturing of innovative and environmentally friendly compact cars,” the companies said in a statement.”

Volkswagen and Suzuki said that as demand increases for compact cars and fuel-efficient powertrains, both will offer solution for customers in emerging markets that are buying a car for the first time and for those in “advanced economies” that are seeking to lower their CO2 footprint.

Tokyo/Wolfsburg, 09 December 2009 – Volkswagen Aktiengesellschaft and Suzuki Motor Corporation have reached a common understanding to establish a close long-term strategic partnership. A framework agreement has been signed by representatives of both companies today.

In terms of global presence and product diversity, the partnership marks an important step towards the future for both Volkswagen and Suzuki. In terms of product portfolio, global distribution and manufacturing capacities, Volkswagen and Suzuki ideally complement each other. The companies plan a joint approach to the growing worldwide demand for more environmentally friendly vehicles. The management of Volkswagen and Suzuki have concluded that the complementary strengths of each company make for a perfect fit in exploiting their respective advantages as well as rising to the challenge of the global market.

In the automotive industry, where globalization and diversification proceed in parallel, both companies will establish a cooperative relationship while respecting each other”s independence as a stand-alone entity. Both parties are focused on achieving synergies in the areas of rapidly growing emerging markets as well as in the development and manufacturing of innovative and environmentally friendly compact cars.

To support a smooth development of this relationship, Volkswagen will purchase 19.9% of Suzuki”s issued shares. The Closing of the transaction is subject to approval of the relevant authorities and is expected in January 2010. Suzuki intends to invest up to one half of the amount received from Volkswagen into shares of Volkswagen. Both companies will form a long-term strategic partnership based on this which will support their successful strategies in these challenging times.

As demand continues to rise for smaller cars and for powertrains with higher fuel efficiency and lower CO2 output, Volkswagen and Suzuki will offer a compelling solution for customers in emerging markets buying a car for the first time and also for customers in advanced economies seeking to lower their CO2 footprint while still enjoying the freedom of transport offered by an exciting range of cars.

Company information
Suzuki is the world leader in the mini-car segment: with a workforce of approximately 51,000, the company sold 2.3 million vehicles and 3.1 million motorcycles in the 2008/2009 financial year (to March 31), generating sales revenue of € 20.9 billion and an operating profit of € 534 million. Suzuki operates 35 production facilities in Japan and other countries such as Indonesia, India, China, Thailand and Spain.

In fiscal year 2008 Volkswagen, which has a workforce of 370,000, sold 6.3 million vehicles, generating sales revenue of € 113.8 billion and achieved an operating profit of € 6.3 billion. Volkswagen operates 61 production plants worldwide.