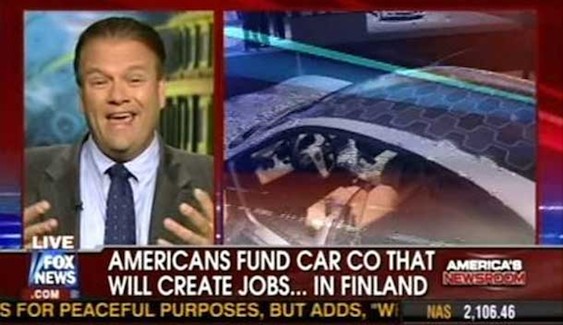 In the past, egmCarTech has reported on loans and funding that Tesla Motors has received from the government to establish facilities in Michigan and California, and now, Fox News has also reported the on the same. Well, kind of.

Hybridcars.com is reporting that, “According to Fox News, the US Department of Energy threw away nearly $1 billion in loans to Fisker Automotive and Tesla Motors””two Calif.-based auto startups trying to produce the next generation of American-made energy-efficient cars. On several of its shows, including America’s Newsroom and Your World, Fox News criticized the loans because Fisker and Tesla currently produce expensive cars that are made in Europe.”. Martha MacCallum of America’s Newsroom, a Fox News program, also said. “Listen to this. The US government is making a $529 million loan to a small car company that happens to be backed by former Vice President Al Gore. Get this. It’s called the Karma. It’s a hybrid. It’s built by Fisker Automotive. The price tag for this greenmobile is about $89,000.”. and during that same segment, the text on the screen read, “Americans Fund Car Co That Will Create Jobs…In Finland.”.

For a network that prides themselves on their claims of being the only truly ‘Fair and Balanced’ news network, the above could not be further from treatment that even almost resembles fairness or balance. Even less fair balanced though is the following statement from Fox News contributor Stephen Moore: “I think most of the people watching this show, I think, would question the wisdom of the Department of Energy giving out these grants in the first place. But I think the vast, vast majority of Americans would say, at least if we do it, find an American company that’s going to employ American workers to do this.”.

Now for fairness and balance:

The Tesla Roadster is indeed manufactured in England, and components of the Fisker Karma are certainly made in Finland. The DOE loan to Fisker is for engineering work to be conducted at the company’s Pontiac, Michigan and Irvine, California, Headquarters. The research that Fisker plans to do will eventually culminate in the annual production of 75k to 100k plug-in hybrids beginning in 2012. The new Fisker vehicle will also be priced much more modestly than the Karma; about $45,000.

Tesla’s funding is to support production of the Model S, which is expected to begin production in 2011 and sell for about $55,000, with production reaching 20,000 vehicles per year by the end of 2013. The SoCal location is expected to create 1,000 jobs, while another Tesla project, also using the funding, will employ 650 in NoCal, at a facility that will manufacture battery packs and drivetrains.

In actuality, these loans were responsibly given, and are perhaps critical in getting America on the cutting edge of hybrid and electric vehicle technology, though that is not what the fair and balanced folks at Fox would have you believe.