FoMoCo has just announced that it is adding a third shift to its Dearborn Truck Plant and Kansas City Assembly Plant’s sport utility line to meet strong demand for Ford F-150 and Escape vehicles. The move will add full-time employment for 2,800 employees who have been working on a two-weeks-on and one-week-off rotating basis.

The changes announced will result in the additional production of approximately 10,000 F-150 pickups and 2,400 Escape SUVs.

The Ford Escape and the Ford Escape Hybrid set a July sales record last month of 20,241 units, resulting in a 16 percent share of the SUV segment in the first 7 months of July. The Ford F-150, the best-selling pickup for 32 consecutive years, posted its best U.S. monthly sales of 2009 with 36,327 units sold.

* Ford’s Dearborn Truck Plant in Dearborn, Mich., will resume as a three-crew operation in September, to meet demand for F-150 pickups in the U.S. and Canada. The move will result in full-time employment for 2,800 employees who had been working on a two-weeks-on and one-week-off rotating basis since April.

* Ford is moving to a three-crew operation from a two-shift operating pattern at Kansas City Assembly Plant in Claycomo, Mo., in October to maximize the plant’s efficiency and help to better meet demand for fuel-efficient Ford Escape and Mercury Mariner utilities

* In August, Ford is on track to post its highest monthly F-Series and Escape sales of 2009 following strong sales for both vehicles in July

In August, Ford expects to post its first monthly year-over-year sales increase for F-Series trucks since October 2006, as well as another record-setting sales month for Escape.

“Even with “˜Cash for Clunkers’ behind us, we expect that demand for our fuel-efficient, high quality new vehicles will remain strong,” said Ken Czubay, Ford vice president, Marketing, Sales and Service. “We had a solid July sales month, and we are headed toward an even stronger August. We’re being as creative as we can in pushing the system to meet the demand for our products.”

To meet demand, the operating pattern changes announced at Dearborn Truck Plant will result in the additional production of approximately 10,000 F-150 pickups this year and full-time employment for 2,800 employees who had been working on a two-weeks-on, one-week-off rotating basis since April. The changes at Dearborn Truck will go into effect in late September.

The addition of a third crew on the SUV line at Kansas City Assembly, when combined with previously announced incremental overtime at the plant that began earlier this month, will deliver approximately 2,400 additional Escapes and Mariners by the end of October. Employment levels at Kansas City Assembly will remain unchanged, as the plant also moves from two shifts to one shift of production on its pickup truck line. The changes there are effective beginning in mid-October.

The production increases of both vehicles were included in the company’s previously announced production plan for the third and fourth quarter of this year.

“We continue to work together with the UAW to find solutions in our manufacturing facilities that will make them more efficient and our business more competitive,” said Joe Hinrichs, group vice president, Global Manufacturing and Labor Affairs. “The operating pattern changes we are making in these two plants will accomplish both goals, while helping Ford to better meet real customer demand for Ford vehicles.”

The Ford Escape and Escape Hybrid, the world’s most fuel-efficient utility vehicle, set a July sales record last month of 20,241 units, its third-highest monthly sales performance since its introduction in 2000. The Escape’s share of the small utility segment is 16 percent in 2009 through July, an increase of 2.3 points compared to the same period in 2008.

At the same time, the company’s F-Series trucks, the best-selling truck for 32 consecutive years, posted its best U.S. monthly sales of 2009 with 36,327 units and total year-to-date share of 34.4 percent – a 1.3 point increase over year-ago levels. Further, F-Series trucks have been the sales leader in Canada for the last three months.

“Customers are taking notice of Ford’s fresh new lineup, and they recognize our best-in-class quality, fuel efficiency and smart technology,” said Mark Fields, Ford’s president of The Americas. “In fact, both internal and external studies show a positive trend in the percentage of consumers with favorable opinions about Ford and our vehicles. When customers decide to pick up a Ford, Lincoln or Mercury for their driveways, we want to be ready for them.”

The Escape and F-150 helped Ford record its ninth retail market share gain in 10 months in July. Other highlights in July include:

More new products are on the way. The first new 2010 Ford Taurus sedans were delivered at the end of July, as well as the first Transit Connects.

This summer, Ford also debuted its EcoBoost engine technology in the Taurus SHO, Lincoln MKS, Ford Flex and all-new Lincoln MKT crossover vehicle. In these vehicles, EcoBoost provides the fuel economy of a six-cylinder engine and the performance of a V-8. 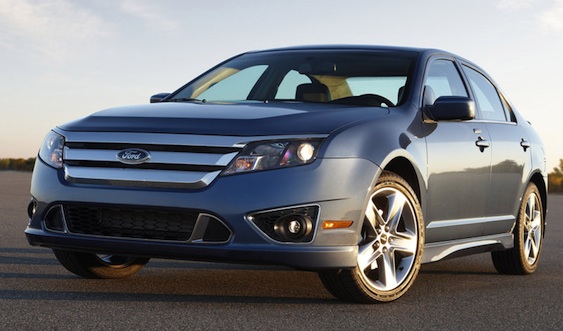