Following the details on the U.S. spec 2009 Audi Q5, Audi has dropped the pricing info on the all-new compact crossover that will hit showrooms next week. The 2009 Audi Q5 will be available in three equipment levels with pricing starting at $37,200 for the Audi Q5 Premium. The Audi Q5 Premium Plus and the Q5 Prestige will start at $41,500 and $48,200 respectively (note that all prices do not include a destination charge of $825).

Standard features on all 2009 Audi Q5 models include the automakers signature LED tail lights, roof rails with aluminum cross bars, three-zone climate control and reclining and sliding rear seats. The 2009 Audi Q5 will also be the first Audi vehicle with the optional MMI Navigation Plus. The MMI Navigation Plus offers 40 gigabytes of memory (10 GB for media storage), DVD drive and an automotive grade NVIDIA chip for graphics processing.

With the new Q5, Audi will have its first crossover vehicle for luxury car buyers who otherwise might have considered buying the Lexus RX, the BMW X3 or the Mercedes-Benz GLK.

The launch of this new vehicle allows Audi its first opportunity to surpass those, and other, contenders in the popular luxury crossover vehicle segment. The new Audi Q5, with its combination of head-turning exterior and interior design, comprehensive safety features expected of a premium luxury vehicle, technological innovation and responsive Audi performance, more than achieves that goal.

“Luxury crossover vehicles appeal to a wide audience seeking both practicality and performance,” said Johan de Nysschen, President, Audi of America. “But monotony has developed in that segment – sameness we’re certain the Audi Q5 now disrupts with its array of distinctive styling cues and forward-thinking features.”

The Q5 indeed offers plenty of unique features that give it a balance of functionality, luxury and performance. The Q5 will be the only vehicle in its segment with three-zone climate control, which lets drivers and passengers select their own comfort levels. It is the only vehicle in its segment with 40/20/40 rear seats that recline and offer fore-aft adjustment for the comfort of passengers and for balancing cargo-carrying capabilities.

Audi is also equipping the Q5 with its signature LED tail lights as standard equipment, including running lights, brake lights and turn signals. The Audi Q5 will offer standard hitch preparation for 4,400-pounds of towing capacity, which puts it at the head of its class. Also standard are roof rails with aluminum cross bars that sync with the Audi ESP system to adapt accordingly.

Audi has a strong reputation for outstanding automotive interiors and that tradition carries through in the Q5 with standard twelve-way power front seats, leather seating surfaces throughout and genuine wood or brushed aluminum inlays. Available exclusive luxury touches on the Audi Q5 include the Bang & Olufsen Sound System and the exclusive Audi drive select system that allows motorists to choose among four distinctive driving configurations.

The Audi Q5 will be the first model sold in the U.S. with available MMI Navigation plus, the third generation of Audi’s acclaimed MMI (Multi-Media Interface) system, which manages entertainment, communications and navigational information.

The new MMI Navigation plus offers a high-capacity hard disk with 40 gigabytes of memory (including 10 GB for media storage), DVD drive and an automotive grade NVIDIA™ chip for graphics processing. The added processing power allows MMI Navigation plus to render 3D maps of the entire U.S., including branded points of interest, and detailed images of buildings while offering real-time traffic information. The system also features a new, larger screen that measures seven inches from corner to corner, a vocal command recognition system that understands complete words in a variety of languages and improved joystick controls.

The Audi Q5 is derived from the same Audi-exclusive platform first developed for the A4 model range. The versatility of that vehicle platform gives the Q5 the driving comfort and performance characteristics of a luxury performance automobile and the longest wheelbase in its class. The efficient engineering and design of the Q5 also translated into shorter front and rear overhangs for better weight distribution to help stability. Audi also widened the vehicle platform to increase shoulder room inside the Q5 and to optimize the driver’s seating position for a more commanding view of the road.

The Audi Q5 will also lead the segment of AWD, gasoline-powertrain crossover vehicles in fuel economy. According to the U.S. EPA, the Audi Q5 achieves 18 mpg city mileage and 20 mpg combined – both tops in the category – along with 23 mpg highway mileage. 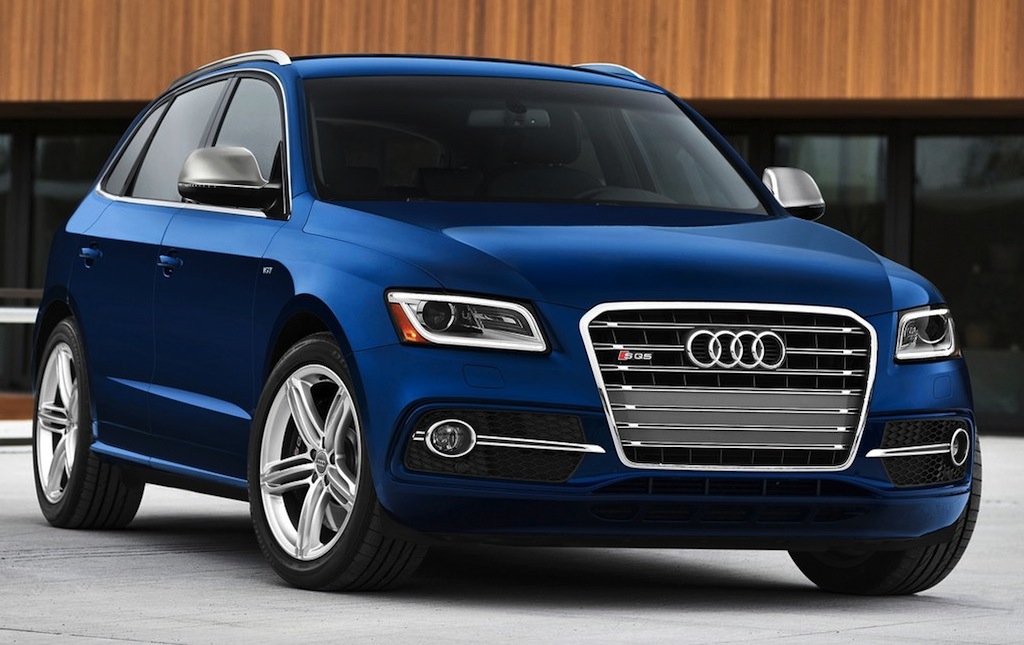 2014 Audi SQ5 coming to Detroit, goes on sale in the U.S. in the third quarter