Following the new HAMANN Volcano, the German tuner has also dropped the details on the new HAMANN BMW X6. Along with some significant performance enhancement for the entry-level X6 models, HAMANN has added a new body kit that consists of a new front skirt with integrated LED daytime running headlights, a three-part rear casing and a new roof spoiler. Customers can also opt for a small or large and more prominent rear spoiler and a new bonnet made of ultra-light carbon.

The HAMANN BMW X6 programme offers a car which does not only have the characteristics of an SUV, but also of a sports coupÃ©. As a certified specialist for sport accessories, HAMANN-Motorsport is especially focusing on the driving dynamics segment of this Crossover model. For this reason, the technicians are refining the aerodynamics, motor and running gear. The modifications turn the BMW X6 into an automobile which makes nearly every wish come true as far as performance is concerned. But the Laupheim-based refiner can do even more: an extensive interiorand rim-programme completes the X6 refinement and makes the automobile stand out against the vast number of other upper class SUVs.

The range of HAMANN performance enhancement is as manifold as the choice of BMW motors. Thus, the technology specialist equips the X6 xDrive35i with a motor performance of 360 hp / 265 kW at 5,230 rpm. At the same time, the maximum torque rises by 140 Nm to 540 Nm within the speed range from 1,300 to 5,000 rpm. Thereby, HAMANN also suspends the 250 km/h limit and allows an impressive speed of 275 km/h. The Diesel version is also provided with extra power. After re-programming the serial motronics, the xDrive30d renders 265 hp / 195 kW and draws a maximum torque of 600 Nm to the crankshaft. The motor version xDrive35d turns into an enormously powerful sprinter as well. The engineers from Laupheim were able to tease 320 hp / 235 kW and a sensational torque of 660 Nm at 2,000 rpm out of the self-igniting engine. Moreover, the sport mufflers by HAMANN-Motorsport are adjusted to the various performance kits. The product range does not only offer a double-pipe, but also a four-pipe system which renders a sonorous and earthy sound.

The exclusive HAMANN auto body programme renders an optimal airflow over the car silhouette. The body kit consists of a sportive and energetic front skirt with integrated LED daytime running lights, a three-part rear casing and an attractive roof spoiler. For additional output on the rear axle, the customer can either opt for a small restrained or large and prominent rear spoiler. According to customer specifications, the BMW specialist can also replace the serial bonnet with an ultra-light carbon version.

Single- or multi-part, sportive and striking or elegant and noble – HAMANN offers a wide range of wheel designs in different sizes. The ultimate rim is a 23-inch version called DESIGN EDITION RACE Anodized for the X6 wheel arches. The ultra-light forged wheel combines power and elegance. The black varnished rim star and the titanium bolting both emphasise the dynamics of the wheel. The highly polished rim flange on the other hands implies a noble appearance. HAMANN offers the 23-inch wheel with tyres measuring 315/25R23 from 9,385 euros.

The new aluminium wheels with special running gear springs are perfectly put into focus. Thereby, progressively coiled springs lower the SUV´s center of gravity by maximally 40 mm at the front- and rear axle.

Perfected technology for the interior

In addition to the consisting serial interior equipment, HAMANN offers accessories made of high-quality aluminium. Pedals and foot rests render motorsports flair and perfectly match the 12-part Hamann decoration set made of carbon fibre. An instrument dial with a scaling up to 300 km/h and a three-spoke sport steering wheel render an additional energetic overall impression. 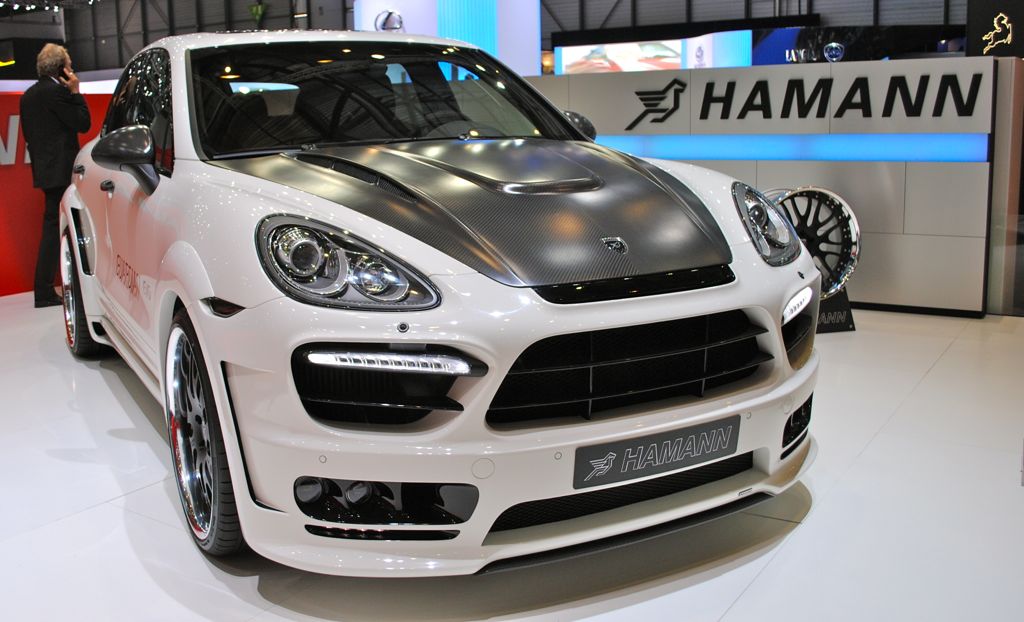