Volvo has released the first teaser images of its next concept car which will hint at the next-generation Volvo S60. The concept, which has yet to be named, will be shown for the first time at the 2009 Detroit Auto Show in January.

Of course we doubt the crystal panel will make it into production but it’ll be nice to see it in action on the concept.

Volvo Cars has engaged world-famous Swedish glassworks Orrefors in the work with the company’s next concept car, which will be a first taste of the next-generation Volvo S60. The joint creation, a floating centre stack of hand-made Orrefors crystal, will be shown for the first time at the Detroit international motor show in January 2009.

In the concept car, the graceful, crystal-clear centre stack forms a gentle, calm wave from the instrument panel all the way to the rear seat backrest.

“It almost looks like a waterfall from the instrument panel, flowing through the centre of the car,” says Volvo Cars design director Steve Mattin.

The crystal panel appears to float above the centre console’s smart functionality. It rests softly on rubber pads and with the help of invisible light sources the crystal’s shimmering glow can be tailored to match the driver’s mood.

“If you want to explore the full scope of Scandinavian design, Sweden’s glassworks are a natural source of inspiration. Large glass areas are also very much part of modern Swedish architecture, creating the special, light transparency,” says Steve Mattin.

He adds: “In a concept car, you are able to release your imagination and creativity. Our iconic, super-thin centre stack was the perfect subject. We reinterpreted it and gave it a refined new form. Then it was up to Orrefors to use their superb skill to transform our exciting vision into reality.”
Handicraft down to the tiniest detail

The experts at Orrefors were keen to accept the challenge and the result is one of the most unusual and handicraft-intensive objects in the company’s 110-year history. Producing the stack was in itself a challenge beyond the ordinary – even for the experienced experts at Orrefors.

Traditionally, the moulds for the crystal are first chiselled by hand from thick planks of alder wood. After casting, the glass is carefully polished to produce its final, crystal-clear lustre.

“The undulating, slightly twisted shape and the precise dimensional requirements were two exciting challenges we had to face. Crystal is a living material, shaped by living people. We are not used to working with tolerances of tenths of a millimetre. What is more, we’re talking here about an exceptionally large piece of glass,” explains Orrefors design manager Gunilla Arvidsson.
Crystal-like future plans

In order to meet the relevant strength standards, the finished piece consists of three sections joined together at the Volvo Cars concept car workshops.

“The full-size crystal piece in the concept car will not be a production feature. However, it does open up opportunities to use crystal on a smaller scale in the future. We’ll have to see how our customers respond,” says Steve Mattin.
Creativity and functionality

Although the material in the centre stack radiates uninhibited artistic freedom, the functions that are integrated have been thought through in every single tiny detail.

– Beside the driver’s seat, the crystal console cuts straight through the instrument panel and its upper section forms a navigation screen at the precise height of the driver’s combined instrument.

– At the bottom, the four iconic rotating controls protrude from elegant matt-polished recesses in the glass panel. In the middle there is a removable remote control.

– The gear selector has a versatile new shape. In the horizontal position it offers drive in automatic mode. If the driver is in the mood for sporty manual gearchanges, the lever can be flipped up into the vertical position. Beside the gear selector there is also a starter button and parking brake.

– The centre console runs all the way to the rear seat backrest, and under the crystal panel between the individual seats there are two drinks holders that slide elegantly forward when required.

“We’ve put the focus on ergonomics and safety. With the combined instrument at the same height as the navigation screen, all it takes is a horizontal eye movement to switch between sources of information. Another example is that the controls used when you start and stop driving are a few centimetres from each other near the gear selector,” explains Steve Mattin.

At the Volvo Cars design centre, exploring the glassworks in the deepest forests of southern Sweden has been a stimulating adventure.

“The clean lines of the Orrefors products have been a true source of inspiration for many years. This was perfect timing for using crystal as a material in a concept car too,” says Steve Mattin. For the Orrefors glassworks, the debut as a supplier to the car world has also served as a new creative inspiration.

“Volvo’s thin centre stack is an industrial product with an artistic yet at the same time functional form. It immediately inspires you to think of other application areas. Why not an elegant hanging ceiling light or a table-top ornament of some sort? We’ll just have to see,” says Gunilla Arvidsson. 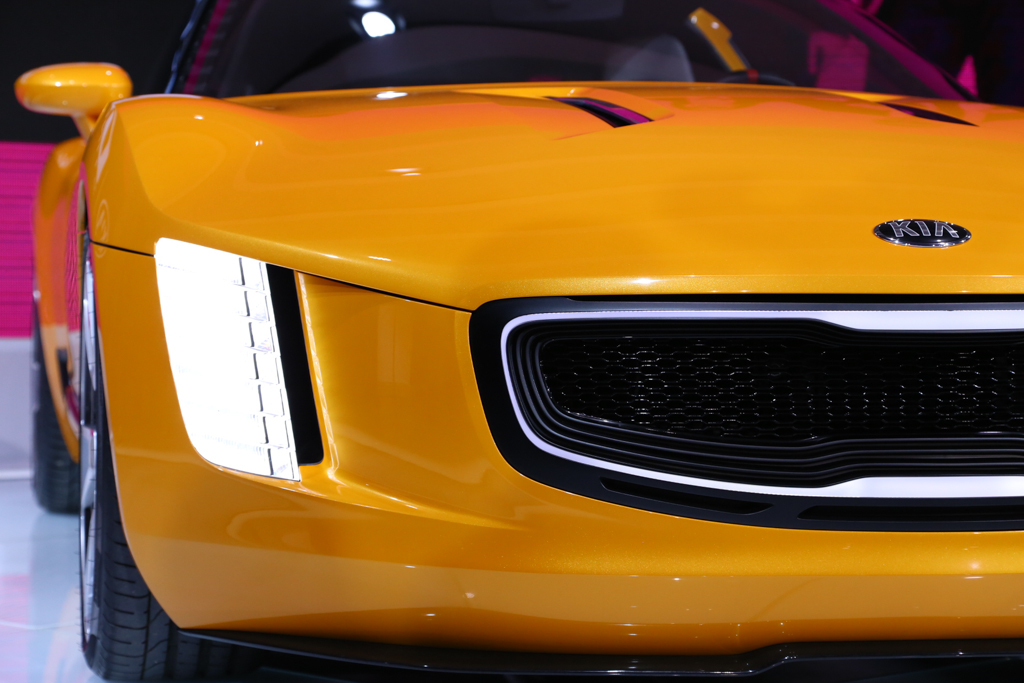