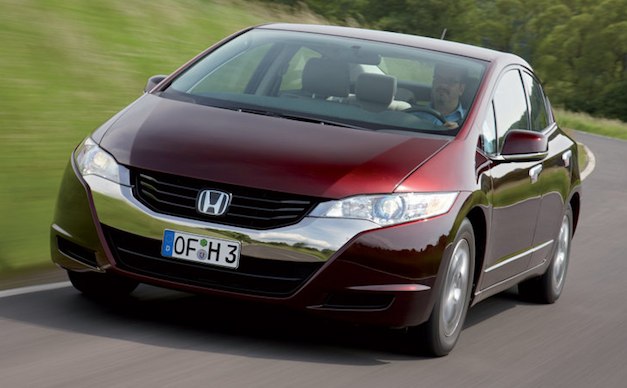 Honda today announced five of its first customers to get the new FCS Clarity hydrogen fuel-cell powered car along with details of its first fuel-cell vehicle dealership network in the U.S. Film produces Ron Yerxa will take the first FCX Clarity in July. Joining him will be actress Jamie Lee Curtis, business owner Jim Salomon, actress Laura Harris and Jon Spallino who has been leasing the current FCX since 2005.

Honda also announced that three Southern California dealerships including Power Honda Costa Mesa, Honda of Santa Monica and Scott Robinson Honda will be the company’s first fuel-cell vehicles dealerships in the U.S. All are located in close proximity to hydrogen refueling stations and are well-positioned to support the automakers growing base of FCX Clarity customers.

The 134-hp Honda FCX Clarity gets a combined fuel-economy of 74mpg according to EPA mileage estimates. The car is capable of a 280 mile range.

To provide its customers with outstanding sales and service support and as a critical step in advancing fuel cell vehicles in the real world, American Honda announced the establishment of the first network of dealers to facilitate the sales and service of fuel cell vehicles. The three Southern California Honda dealers are Power Honda Costa Mesa (Costa Mesa), Honda of Santa Monica (Santa Monica) and Scott Robinson Honda (Torrance).

“This is an important day in the history of fuel cell vehicle technology and a monumental step closer to the day when fuel cell cars will be part of the mainstream,” said John Mendel, executive vice president of American Honda. “Our customers and dealers share in our vision for a cleaner and more sustainable transportation future, and share in our challenge to embrace a new generation of automotive technology that we think will carry the auto industry and its customers into the future.”

The five customers announced today were among the very first people to share with Honda their passion for the environment and interest in the FCX Clarity, dating back to its debut as a concept model at the 2005 Tokyo Motor Show. The initial criteria for fuel cell vehicle ownership, including proximity to hydrogen refueling stations, driving patterns and vehicle needs, all played a part in Honda’s customer selection process.

“Auto companies can’t explore the potential for fuel cell technology as the ultimate solution to our world’s energy and environmental challenges by ourselves. Our customers are true pioneers and leaders in the effort to bring fuel cell technology to the marketplace,” said Mendel.

Ron Yerxa, a film producer and partner at Bona Fide Productions, is a long-time car enthusiast and advocate for the environment. He lives with his wife, Annette Ballester, in Santa Monica, California. Yerxa first learned of the FCX Concept vehicle from a car magazine and contacted American Honda to share his interest and enthusiasm.

Jon Spallino, partner and Chief Financial Officer of an Irvine, California-based engineering and construction firm and the world’s first retail customer of a hydrogen fuel cell-powered vehicle, is excited to trade in his first-generation FCX for the all-new FCX Clarity. Having lived with fuel cell technology for three years now, Spallino and his family, residents of Redondo Beach, California, are looking forward to the all-new vehicle’s vastly improved performance, enhanced features, improved fuel efficiency, and advanced four-door, four-passenger sedan design.

Actress and children’s book author Jamie Lee Curtis and her husband, filmmaker Christopher Guest, also live with their family in Santa Monica. Curtis and Guest have owned other alternative fuel and hybrid vehicles, and they continue to seek out ways to live and advocate a greener lifestyle.

Jim Salomon, a business owner and car enthusiast, resides in Newport Beach, California with his family and will be American Honda’s first retail customer to regularly refuel at the recently renovated Irvine hydrogen refueling station. Salomon and his family live in a home he designed and built with an emphasis on energy efficiency as well as recycled and sustainable materials.

Actress and green advocate Laura Harris learned about the FCX Clarity from a friend and test drove a prototype car at the Los Angeles auto show in November 2007. Canadian-born Harris lives in Silverlake, California, and will refuel primarily in Burbank. Lessons learned from her usage patterns and experiences can help pave the way for eventual market expansion outside of the Irvine, Torrance, and Santa Monica areas.

American Honda is working with its dealer partners to implement processes for fuel cell vehicle lease, delivery and service support for the duration of their leases. Establishing a dedicated sales network and service infrastructure provides customers with the best balance of convenience and the highest quality of service. When the FCX Clarity requires periodic maintenance, customers will simply schedule a visit with their local FCX Clarity dealer.
American Honda will perform all required work at its specialized fuel cell service facility, in the greater Los Angeles area. Upon completion of the work, the dealer will return the vehicle to the customer.

About the FCX Clarity

The FCX Clarity is a next-generation, hydrogen powered fuel cell-powered vehicle. Propelled by an electric motor that runs on electricity generated in the fuel cell, the vehicle’s only emission is water, and its fuel efficiency is three times that of a modern gasoline-powered automobile. Based on the entirely-new Honda V Flow fuel cell platform, and powered by a highly compact, efficient and powerful new Honda V Flow fuel cell stack, the FCX Clarity marks the significant progress Honda continues to make in advancing the real-world performance and appeal of the fuel cell car. Significant advances over Honda’s previous generation FCX include:

Honda is responsible for the development of the world’s first fuel cell car (Honda FCX) to be certified for regular commercial use by the U.S. EPA and California Air Resources Board; the first deployment of a fuel cell car with a fleet customer; and the first individual retail customer for a fuel cell vehicle.

*Based on official 2008 EPA estimated range and fuel efficiency values