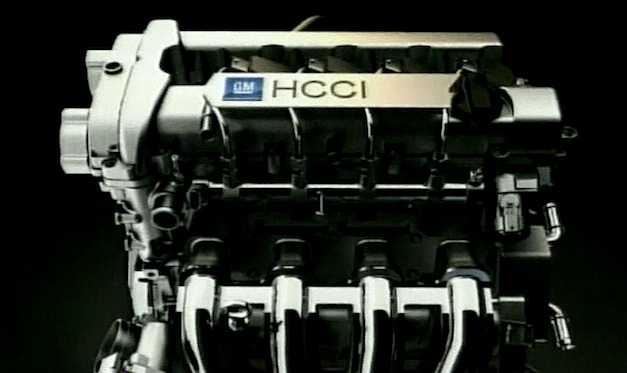 GM today introduced the combustion process formally known as homogeneous charge compression ignition, or HCCI, for the first time in two drivable concept cars. GM has fitted the 2007 Saturn Aura and the Opel Vectra with HCCI which provides up to 15 percent fuel savings while meeting future emissions standards.

Virtually the engines burn gasoline in the same way that a diesel engine burns diesel fuel. To do this the process is combined with advanced technologies, direct injection, electric cam phasing, variable valve lift and cylinder pressure sensing.

Other auto makers have been working on this type of engine technology for a while but GM is the first to offer it in a drivable vehicle. The process promises the fuel economy of a diesel engine, which is typically much more efficient than a gasoline engine, while offering the cleaner exhaust of a gasoline engine.

PONTIAC, Mich. ““ Engine experts have dreamt about it, talked about it, and lectured about it, and today ““ for the first time ““ General Motors Corp. is letting outside parties drive the “most awaited advanced combustion technology” of the last 30 years.

“I remember debating this combustion capability when I was in college,” said Tom Stephens, group vice president, GM Powertrain and Quality. “It was just a dream then. Today, using math-based predictive analysis and other tools, we are beginning to see how we can make this technology real. By combining HCCI with other advanced gasoline engine and control technologies we can deliver a good fuel savings value for consumers.

In an integrated engine concept, HCCI along with other enabling advanced technologies approaches the engine efficiency benefit of a diesel, but without the need for expensive lean NOx after-treatment systems. Its efficiency comes from burning fuel at lower temperatures and reducing the heat energy lost during the combustion process. Consequently, less carbon dioxide is released because the vehicle”s operation in HCCI mode is more efficient.

The HCCI-powered concept vehicles ““ a production-based Saturn Aura and the Opel Vectra, both with a modified 2.2L Ecotec four-cylinder engine ““ drive like conventionally powered vehicles, but offer up to 15 percent improved fuel efficiency relative to a comparable port fuel injected engine. (This fuel efficiency improvement will vary depending on the vehicle application and the customer driving cycle.) The drivable concept vehicles represented one of the first tangible demonstrations of HCCI technology outside of the laboratory.

“I am pleased with our engineering team”s progress,” said Stephens. “It is another initiative in GM”s advanced propulsion technology strategy to lessen our dependence on oil. HCCI, direct-injection, variable valve timing and lift, and Active Fuel Management all help improve the fuel economy and performance of our internal combustion engines. I am confident that HCCI will one day have a place within our portfolio of future fuel saving technologies.”

Highlights of HCCI technology include:

An HCCI engine ignites a mixture of fuel and air by compressing it in the cylinder. Unlike a spark ignition gas engine or diesel engine, HCCI produces a low-temperature, flameless release of energy throughout the entire combustion chamber. All of the fuel in the chamber is burned simultaneously. This produces power similar to today”s conventional gas engines, but uses less fuel to do it.

Heat is a necessary enabler for the HCCI process so a traditional spark ignition is used when the engine is started cold to generate heat within the cylinders and quickly heat up the exhaust catalyst and enable HCCI operation. During HCCI mode, the mixture”s dilution is comparatively lean, meaning there is a larger percentage of air in the mixture. The lean operation of HCCI helps the engine approach the efficiency of a diesel but it requires only a conventional automotive exhaust after-treatment. Diesel engines require more elaborate and more expensive after-treatment to reduce emissions.

HCCI builds on the integration of other advanced engine technologies ““ some of which are already in production and can be adapted to existing gas engines. The cylinder compression ratio is similar to a conventional direct injected gas engine and is compatible with all commercially available gasoline and E85 fuels.

GM demonstrated the adaptation of the HCCI technology in driveable concept vehicles based on conventional, production-based products like the Saturn Aura and Opel Vectra. The Aura features an automatic transmission, whereas, the Vectra, which is aimed at the European market, has a manual transmission.

Both vehicles are powered by a 2.2-liter Ecotec engine (180 hp and 170 lb.-ft of torque or 230 Nm) that features a central direct injection system, with variable valve lift on both the intake and exhaust sides, dual electric camshaft phasers and individual cylinder pressure transducers to control the combustion as well as deliver a smooth transition between combustion modes.

Currently, the GM demonstration prototypes can operate on HCCI up to approximately 55 mph, transitioning to spark ignition at higher vehicle speeds and during heavy engine load. An extended range for HCCI operation is intended as further refinements to the control system and engine hardware are made.

“Perhaps the biggest challenge of HCCI is controlling the combustion process,” said Prof. Dr. Uwe Grebe, executive director for GM Powertrain Advanced Engineering.. “With spark ignition, you can adjust the timing and intensity of the spark, but with HCCI”s flameless combustion, you need to change the mixture composition and temperature in a complex and timely manner to achieve comparable performance.”

GM”s global HCCI team will continue to refine the technology in the wide range of driving conditions experienced around the globe, from extreme heat and cold to the thin air effects of driving at high altitude.